“We should all help him be a better Agent, and not looking down on him.”
―Alicia defending Ali in MISSION: ROLE

Alicia is an agent under M.A.T.A. and Ali's rival, though she is not necessarily an arch enemy. Alicia is a class monitor and top student of Class 6 Avicenna in SRT Cyberaya 1. While in MISSION: EVEN, she is shown to be General Rama's daughter; it in the movie, she reveals herself to be an orphan, and the General is his froster guardian, who cared him like his own child.

Alicia loathes Ali greatly to the point of abandoning him in MISSION: PROTOCOL GEGAS, and is usually annoyed by Ali's unprofessional skills as an agent, which usually fails their missions.

Ever since "MISSION: PROTOCOL GEGAS", Alicia is traumatized and has not gone for missions. The trauma affects her greatly and General Rama allows her to rest. She is seen going rogue again in MISSION: EVIDENCE, and joins the fight against Uno in MISSION: OVERRIDE.

Alicia has been training since she was a year old; now, at 12, she is a skilled agent.

Before she was allowed to go on missions, Alicia assumed the identity of a masked vigilante, completing M.A.T.A.'s missions for them, which angers General Rama, who had dubbed her the "Pengacau Bertopeng" ("Masked Meddler" in English). However, she revealed herself as both a M.A.T.A. agent and the Masked Meddler in Mission: EVEN, when she figured out that Ali is part of M.A.T.A. and was one of the agents she had helped the previous night as the Masked Meddler. After MISSION: EVEN, where she had impressed and proven herself as a capable agent to her father, Alicia was granted permission to go on missions as part of a team with Ali and Bakar under the grudging approval of General Rama.

Alicia is likely to be a Chinese-Indian race. She has a light skin tone, black hair and brown eyes. Being a Neuro Agent, Alicia wears an agent suit with the colors black and yellow, topped with a green scarf, also wearing a yellow headband. For her school uniform, she wears a green headband. She wears a dark blue outerwear pinafore while the interior was short blue sky blue and wearing a futuristic necklace. For her casual wear, she wears the same green headband on her head. She wears blue denim jumper pants with a striped shirt containing the colors yellow and white under it. Alicia has blood relations with General Rama but racial differences confuse everyone. It was revealed in MISSION: NEO that Alicia was actually the adopted daughter of General Rama after her parents passed away.

Alicia is determinedly stubborn, as noted when she refutes General Rama's instructions and joins the mission to get CTech's drones back in "MISSION: EVEN". She also thinks highly of herself, finding it unfair how Ali, an unseasoned beginner, gets to go on missions just because he has I.R.I.S., while she, an agent who has been training her entire life, was forced to the confines of M.A.T.A.'s training facilities. Because of this, she feels slighted and constantly sets out to prove to everyone, especially General Rama, that she is far greater than Ali, even without I.R.I.S. Alicia sometimes takes it too far, however, when she was almost killed after Dos tosses her into the azurium power reactor and left her to be obliterated in "MISSION: PROTOCOL GEGAS", because she was too busy gloating to Ali about her capability as an agent.

Alicia is also capable of holding a grudge, since she has constantly tried to outdo Ali during missions in her quest to prove that she is the better agent. This spans from "MISSION: EVEN" to "MISSION: PROTOCOL GEGAS", and after she had almost gotten killed, she has withdrawn herself from her teammates and resumes her activities as the Masked Meddler instead of embarking on missions with Ali and Bakar. Alicia is also sarcastic, disciplined, and confident in her skills as an agent. She's also not the type to trust others easily and prefers working alone. Alicia is very hard on herself, aiming to be the perfect agent, and does everything she can from showing weakness; and when she does, she considers herself a failure and beats herself up over even the tiniest slip-up.

In Season 2, Alicia is sent to MATA Academy under the orders of her father. She is tasked to protect Ali and the I.R.I.S. as General Rama can no longer trust anyone in M.A.T.A.. 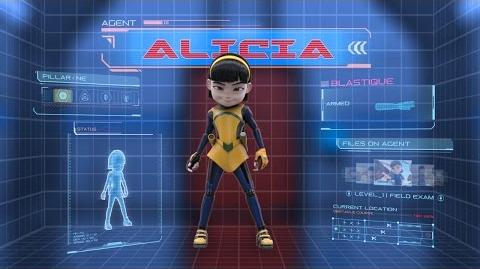 Agent Ali Wiki has a collection of images and media related to Alicia.