“What's up with you Ali? Since you started training with Rizwan, you no longer want to listen to anything I say.”
―Bakar talking to Ali in MISSION: SENSATIONAL

Bakar or Agent Bakar is a M.A.T.A. Agent and biological Uncle to Ali. In Season 2, he is the mentor of KOMBAT agents.

Agent Bakar is an agent under M.A.T.A and is Ali's biological Uncle. He is given the responsibility of training Ali under General Rama's command. As a M.A.T.A Kombat Pillar Agent, he is capable of fighting enemies with various types of martial arts.

At the end of MISSION: SENSATIONAL, Bakar is suspected to be the traitor in M.A.T.A. and believed to be Uno since he is captured copying the blueprint of I.R.I.S. in MISSION: BLUEPRINT by security cameras. However, in MISSION: EVIDENCE, Ali finds out that Bakar is framed as he is being mind-controlled by Dr. Aaron to retrieve the I.R.IS.'s blueprints.

Bakar is light-hearted and friendly, but can be serious when he needs to be. He is protective of his nephew and cares a lot about his family, even his brother-in-law, Ghazali. He does his best to keep M.A.T.A.'s existence a secret, and time and time again lends his Kombat agent skills to important missions. General Rama trusts him with mission plans - and the responsibility of keeping Ali safe while M.A.T.A. searches for a way to separate him from Ali.

Bakar is confident about both his skills and looks, and constantly hits on any lady who crosses his path, including Dos and Jenny, with his cringy and terrible pick-up lines. His only other love is for food - especially burgers, which he tends to eat on the go during missions. As a Kombat agent, he frequently gets beat up and injured. 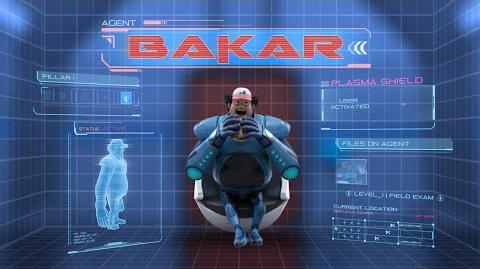 Agent Ali Wiki has a collection of images and media related to Bakar.