The Ejen Ali Game Jam Hackathon Mission is, as its mission states, a hackathon where game creators gather to plan, design and create a mobile game featuring Agent Ali, an animation series made in Malaysia. The Game Jam took place during the aegis of the "KECEMASAN!" trailer.

The event description read: "In a team of 2 to 4 people, collaborate to create a fun, adventure-filled and intelligent mobile gaming experience featuring the kick-butt characters and high-tech experience of Ejen Ali. If we like your idea best, we'll reward you with a cash grant to develop your game into a finished product ready to be launched with the premiere of the Ejen Ali series on TV".

General meaning of the terms "Game Jam and "Hackathon"

In the game development universe, the terms "Game Jam" and "Hackathon", in terms of game development competitions, are mostly used. The meaning of the term “Game Jam” is “a gathering of game developers for the purpose of planning, designing, and creating one or more games within a short span of time, usually ranging between 24 and 72 hours. Game developers are generally made up of programmers, game designers, artists, and others in game development-related fields.”, which, correctly speaking in the term itself, is a composition of the words ‘game’ and ‘jam session’. A jam session describes the musical act of producing music with little to no prior preparation in an effort to develop new material or simply to practice. In the same way, game jams are events in which game developers prototype experimental ideas into playable games.

Meanwhile, the term "Hackathon" is also known as ‘hack day’, ‘hackfest’ or ‘codefest’. This term represents an event in which computer programmers and others involved in software development and hardware development, including graphic designers, interface designers and project managers, collaborate intensively on software projects.

How the Mission Works

STEP 1: Registration had to be done before the event took place. The event managers set up a registration counter online via an EventBrite plugin, however the event registrations were closed during event until further notice.

STEP 2: Participants had to attend the Game Jam session where they would be briefed about the game requirements. Altogether, over 40, sometimes approximately 60+ individuals attended the session, because according to the old-time phrase, "The More the Merrier".

STEP 3: Participants had to form a team. The most notables ones were: Common Extract, Team M8, Luso Labs, Team Blur, 37 and Good Cat. The team had to brainstorm their game concept and pitch it to recruit their team members. So far, there were no brawls or misunderstandings. If a brawl had happened, the event would have had to be cancelled.

STEP 4: The teams had to create their own games. Each team had one and a half days (36 hours) to complete at least 1 playable demo level, as per Game Jam terms and conditions.

STEP 5: The teams had to pitch their demo levels to the Jury Panel members for a chance to win the cash grant.

According to legitimate sources such as Veedo, there were two categories the teams were placed into by the staff. One of them was the Public category. This category was open to both professional and amateur developers.

The other category was the Student category. This category was open to students enrolled in any educational institution at secondary (High School) and/or tertiary (University, College) levels. Some who registered, but ended up as an individual, or did not have experience in coding were match-made into a particular team, provided their age heeds the minimum age limit of 13.

The cash grant was to further develop their ideas within 2 and a half months into a complete game.

The winners would also be mentored by a panel of experienced game developers, domestic and foreign, to fully realize their vision of the games. During the development period, the panel would provide tips on design, testing, troubleshooting, milestone checks and related activities.

The complete game would be released in conjunction with Agent Ali's premiere on TV3 Malaysia, Astro and HyppTV channels 103.

The sponsors were as follows:

Days and weeks after the Game Jam Mission ended, news reports circulated Team M8's and Common Extract's winnings. Among one of these coverages had to come from the New Straits Times.

Primeworks Studios Sdn Bhd Chief Executive Officer Ahmad Izham Omar said the money that the two category winners received, will be used to develop their games further with the guidance of Media Prima Digital. "Hopefully with the amazing qualities we have seen today, we can launch the Ejen Ali mobile game together with the series and it would be a success," he told reporters at the hackathon in Makespace Quill City Mall, here, today. Media Prima Digital together with Primeworks Studios, Wau Animation and Multimedia Development Corp organised the hackathon for industry experts to compete with each other to develop a mobile phone game for the television series Ejen Ali. The animated series was set to be aired on Bananana! TV3, Jan 1 next year.

The banner for the Game Jam

The Game Jam Event in action 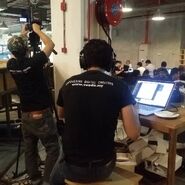 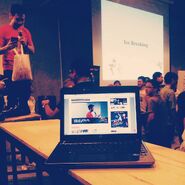 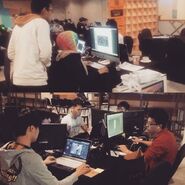 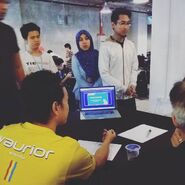 The Panel of Judges 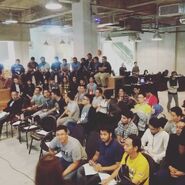 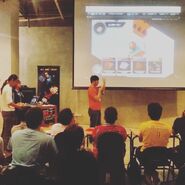 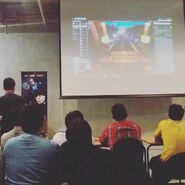 The Outcome of the Event

The outcome of the Ejen Ali Game Jam was new ideas were sparked across the Ejen Ali landscape, new indie games were being developed, new game developers stepped into the international scene as part of coverage where the winners had the chance to take part in other events like Level Up (LVLUP) KL, and Microsoft Imagine Championship. Part of these successes had to do with the release of the game, "Ejen Ali: MATA Training Academy". The game was a wonderful expansion to the ever-advancing smartphone app eco-system.

There will be a new Ejen Ali game set to be released in September 2016, and the gameplay will be different compared to MATA Training Academy.

Retrieved from "https://ejenali.fandom.com/wiki/Ejen_Ali_Game_Jam?oldid=5095"
Community content is available under CC-BY-SA unless otherwise noted.