Ejen Ali Teaser #1 is a proof of concept mockup of what Ejen Ali was envisioned to be, and was vital as part of the birth of WAU Animation Sdn. Bhd. on the 18th of March 2013. The trailer was set at midnight.

This was part of a movie concept, in which the details were supposed to be as follows:

In Urban Malaysia’s own MATA Control Room, Ali was being tracked by a Surveillance Tracking Operating System (stOS) known as MATA-OS. In MATA-OS’s case, it was scanning across each and every area to track Ali's location, and in Ali's case, “EJEN DIKESAN” [translated: "Agent Detected"] was the result. “Ejen Ali - Status: Dalam Bahaya” “Ancaman - Identiti: Tidak diketahui” [translated: "Agent Ali - Status: In Danger // Enemy - Identity: Unknown] On screen, viewers will notice that Ali is marked by the colour orange, whereas the enemies will be highlighted by the colour red.

Ali was being chased by three bad looking bouncers, all in black, on an auxiliary roof of a very tall building. Ali, with his Ejen suit glowing red noting the presence of enemies, ran as fast as he could to get away from them, panting and panting about, breath after breath, move after move. Being smart, Ali saw a fence blocking the way with boxes, so he leapt on the boxes and barrels, glided onto the wall, leapt over the fence and stuck a weapon known as the Electric Sticker.

Knowing that the bouncers would find a way, Ali fired his shockwave blaster pistol at the barrel, denying the bouncers the chance to grab hold of him. The Electric Sticker took revenge onto one of the bouncers, electrocuting him once he tried to climb over the fence. However, naturally, the other bouncer climbed over the fence without any issue and saw a bomb, known as the Sticker Bomb, unbeknownst to whoever implemented it. The bouncer took the bomb and attempted to fling the bomb at Ali, but failed because it was difficult to remove, and it already began to detonate. Soon, the bomb exploded, killing a total of 2 out of 3 bouncers. Ali was determined that he would get away from the bouncers in no time. Ali's Ejen suit’s lights changed to blue, noting Cooldown mode.

Moving along to the BACK ALLEY. Three bouncers tried to shoot down Ali's own pet cat, Ejen Comot as it ran swiftly, dodging every bullet fired, failing any attempt at shooting it down. With the bouncers already chasing down Ejen Comot and a garbage laden alley at the right, Ejen Comot decided it was the perfect time to use its own ability - the skill to camouflage any colour. Camouflaging mode activated, the bouncers searched high and low to find Ejen Comot, with their shiny .45cal pistols under their possession. But they failed and ultimately gave up. The reason behind this failure was Ejen Comot was standing on a sewer drainage pipe next to a dirty wall and Ejen Comot needed to use this skill to trick the bouncers into thinking there were no traces of evidence to find. So Ejen Comot disabled camouflaging mode and left.

Moving back to ALI's side. It was becoming a two-force chase between Ali and the bouncers, originally 8 but now 3 due to 4 bouncers being defeated and an additional one giving up. This time, Ali's Ejen suit was now glowing red again, noting the presence of deadly enemies. Risking his life after realising that the building was exactly as tall as any enterprise building could be, probably 50 floors or less, the bouncers annoyingly could keep up. Ali was running as fast as he could. But soon, the bouncers knew they were behind as Ali increased his running speed to activate his glasses, known as Detector Glasses that enabled his to jump 46.7 metres from the tall building to a lower building. The Detector Glasses then sent information to the MATA-OS Control Room and programmed activation of Ali's Pogo Shoes, which could lead to the springs expanding from Ali's soles and allowing Ali to escape at dangerous ground levels.

And Ali managed to jump from the affected building to the next, making the chase end and the bouncers losing track.

The teaser gained fame when two news updates by Malaysian multimedia portal amanz.my circulated in the Ejen Ali scape. One was about the advancement of Malaysia in technology in the year 2013 while the other was about the Teaser #1 itself. 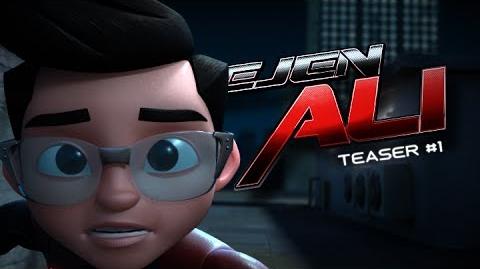 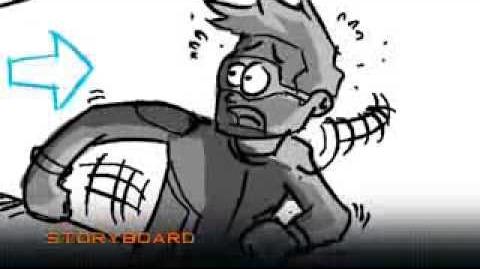