I.R.I.S. (Infinity Retinal Intelligence System) is the device created by M.A.T.A. agents and it is now used by Ali.

The I.R.I.S. was an abandoned and discontinued project in M.A.T.A. until it was stolen by Dos and Trez. Dos gave the I.R.I.S. to Wak Musang for safekeeping until one of their agents arrived to retrieve it by using the code "Tempoyak Udang". When Ali ordered tempoyak udang (Indonesian/Malaysian Food) literally, he thought he was the agent and gave him a lunch box containing the I.R.I.S. free of charge. The I.R.I.S. activated its tracking signal, allowing Dos and Trez to hunt Ali down. Bakar, an agent of M.A.T.A. and the uncle of Ali, went to protect Ali from Dos and Trez. During the fight between Bakar, Dos, and Trez, Ali accidentally activated the I.R.I.S. and used it against Dos and Trez. He used the I.R.I.S. until it used up the energy from his body as a power source. Ali collapsed and the I.R.I.S. returned to its original state and fell off. Bakar tried to use it but failed. After Dos and Trez fled, Ali was taken to the M.A.T.A. headquarters and Jenny explained the I.R.I.S. to Ali. General Rama at first wanted to eliminate Ali after knowing too much about M.A.T.A. and using the I.R.I.S. accidentally. However, Jenny suggested that Ali be sent to missions and used the I.R.I.S. so they can improvise it until she can extract Ali's DNA from it. General Rama accepted her suggestion and recruited Ali as an agent in M.A.T.A. In MISSION: ATLAS, Ali creates Atlas, which can sync to 3 other agents for easier fighting to enemies and opponents.

The I.R.I.S. is activated by a button resembling the official Meta Advance Tactical Agency (M.A.T.A.) logo. It scans a person's irises. If it matches to its user, it transforms into a visor for the user to wear. 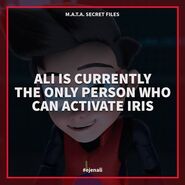 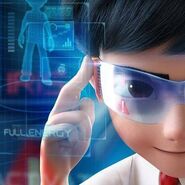