After saving a stray cat from being run over by a car, Ali realizes that the cat reminds him of his old pet cat Labu, hence, he adopts it. What he does not know is that the cat has ulterior motives - to steal the I.R.I.S.!

At night, Aunty Faye is admiring her jewelry while buying some jewelry through Internet using her tablet. Then, a door knock is heard and she opens the sliding door, only to find nobody. When she turns around, she is shocked to find a stray cat sitting on her sofa. She tries to shoo it by throwing things on it. When she lifts an armchair to scare it, she finds that the cat is gone... and so does all of her jewelry!

In M.A.T.A., Ali, Bakar and Alicia are having a simulation training. Using the I.R.I.S., Ali manages to crack the code to a chamber. Then, Bakar allows Alicia to crack the code to safely retrieve the device. Upon finding that it will take 8 minutes to crack it, Ali, feeling impatient, rebels and takes the device by himself despite Alicia's warning. Once Ali takes the device, an alarm rings and M.A.T.A. robots appear as villains. Bakar manages to hold the closing door open. As Ali and Alicia try to escape, Ali stumbles onto a robot and it shoots him with a laser beam. The laser beam stops in mid-air and the simulation training is stopped. General Rama scolds Ali for disobeying and Alicia for letting Ali to get capture by the villains. He says that the I.R.I.S. can be dangerous if it falls into the wrong hands. He reminds them not to repeat the same mistake as a team before signing off. Bakar starts to lecture Ali but he has left the room.

In an abandoned warehouse, Komeng and his henchmen are examining the stolen jewelry, including Aunty Faye's. A limo arrives outside the warehouse, and Abang Bear walks out of the limo and into the warehouse. He sits down and sees the jewelry. Then, Wak Musang shows him a video of Dos giving him the I.R.I.S., which interests Abang Bear.

The next morning, Ali sees his father eating breakfast while working on his tablet in the kitchen. He goes up, greets his father and looks at him with anticipation. However, his father does not understand Ali's excitement, which makes Ali disappointed. Suddenly, Ali's phone rings and it is Viktor Ong. Viktor says "Happy Birthday" to Ali and introduces him a new game to play together. When Ali hangs up the call, his father immediately makes a sandwich with a candle on top of the bread as a birthday gift for his son. Ali is disappointed at his father for forgetting his birthday and goes outside to take out the trash.

After taking out the trash, Ali hears Shaun and Syed yelling while chasing a cat. Ali mistakes it as Labu, his old pet cat. The cat is holding a flat circular object with its mouth. It drops it in the middle of the road and tries to retrieve it. Upon seeing a car is coming forward and it is about to run over it, Ali saves the cat in the nick of time. Shaun and Syed thinks that the cat is Ali's and are angry that their device is damaged due to being run over by a car. Before they can teach Ali a lesson, Ali returns to his house, along with the cat. His father comes out to meet Shaun and Syed, and they leave upon realizing that his father is present.

Ali shows "Labu" to his father, but his father tells Ali that Labu is long gone. He also reminds his son of his responsibility to have a pet, but Ali is eager to adopt the cat, still thinking that it is his long lost pet cat. This causes his father to snap at him, saying that Labu has run away from home since his mother died. This upsets Ali. In order not to continue the argument, his father sighs and tells him that he is going to work before he leaves.

Ali then goes to the kitchen, finding "Labu" tapping on a plate, showing that it is hungry. He takes some food from the refrigerator and feeds him. He tries to pat it but it growls at him. Shortly afterwards, "Labu" falls asleep and Ali notices the wounds on its legs.

A while later, "Labu" wakes up and growls at Ali. Ali decides to let it have some space. "Labu" looks down and sees the wounds on its legs are treated and bandaged. Ali plays his yoyo in a bored way, but then noticed "Labu" is entranced by the yoyo. So Ali plays with it using his yoyo, and then makes it try to catch the red laser dot with a pen. During the chase, "Labu" accidentally bumps onto a photo but Ali manages to catch it before it hits the ground. Ali holds on to the photo, looking very sad. "Labu" sees him and pats his feet, trying to comfort him.

Ali then tries to pat "Labu". With some hesitation, "Labu" allows him to do so. Ali then realizes that its fur is very dirty (he says "Comot"). Ali wants to give it a bath, however, "Labu" runs around the place and eventually hides himself. Having a hard time finding it, Ali uses the I.R.I.S. to find it using X-Ray Vision. Ali finds "Labu" hiding inside the sofa and takes it to the bathroom.

"Labu" is now cleaned up, and its fur is white. Ali finds that it does not look like Labu at all because of the fur colour. So, he renames it "Comot" and the cat meows, showing that it likes its new name. After Ali places Comot on his bed, he deactivates the I.R.I.S. and places it on his bedside table. Viktor suddenly calls him and he answers it. While Ali was focusing on the phone call, Comot sees the I.R.I.S. in its flat circular state and is shocked. The scene changes to show a flashback of Abang Bear showing the still of Wak Musang's video of the I.R.I.S. and a fist pressed onto the keyboard of a laptop. As the flashback ends, Ali finishes his call and turns around, only to find Comot is missing... and the I.R.I.S. too! Ali scavenged the entire house to find the I.R.I.S. but to no avail. Comot, who is hiding behind a sofa using his camouflage, deactivates its power. It hesitates its actions before it runs away.

Meanwhile, Bakar is flirting with a woman in a shop. His phone rings and he answers the call. The call is from Ali. All of the sudden, Bakar shouts "WHAT?!", startling everyone nearby. The scene quickly changes to Ali's house. The doorbell rings and Ali hurriedly opens the door, but is shocked by the presence of Alicia, who is mad at him for losing the I.R.I.S. Ali is dissatisfied to see his rival here, but Bakar tells the duo that they are a team.

Suddenly, Bakar's stomach grumbles and he goes to get food in the kitchen. Ali warns Alicia not to touch his things and follows Bakar. Alicia walks around the living room. She sees cat footprints and imagines Comot's trail. She checks under the sofa and finds a strand of fur left by Comot when it was hiding there.

Alicia enters the kitchen and asks Ali whether he has been hearing the current news. Ali is confused by it. Bakar then tells Ali that an agent always need to be up-to-date on the current news. He notices the plates on the table and wonders how Ali can eat so much despite of his small stature. Before Ali can correct Bakar, Alicia quickly deduces that a cat stole the I.R.I.S., shocking them.

Alicia shows Ali and Bakar the strand of fur left by Comot. The fur strand quickly blends in with the table, showing a camouflage ability. This discovery amazes them. Alicia then shows them a news of Daily Cyber on her phone, which talks about the shocking discovery of an illegal animal experiment. In the news, the police raid on a local animal shelter when the residents have grown suspicious about it due to the missing stray cats around the area. By the time the police carried out the search, the animal shelter has been abandoned. The investigation has revealed signs of animal testing on a genetic level. The evidence shows drugs that give stray cats enhanced strength, agility and thinking skills. Alicia believes that Comot is one of the victimized stray cats and has managed to track it down to Cyberaya Warehouse.

"Looking your bald head, for what?!"

"How about I call you Comot?" 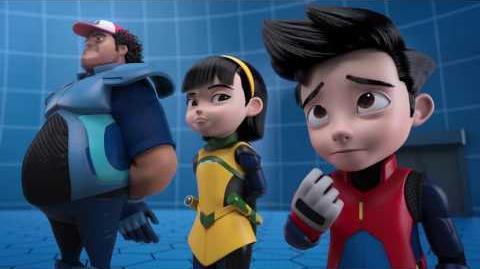 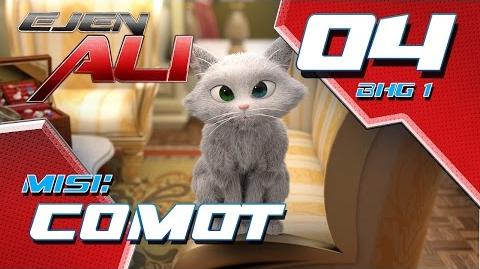 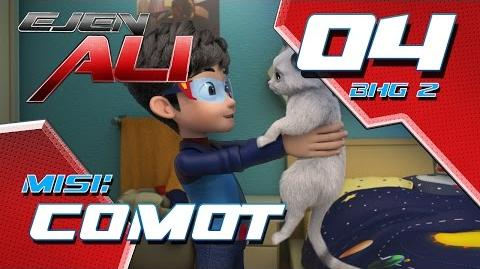 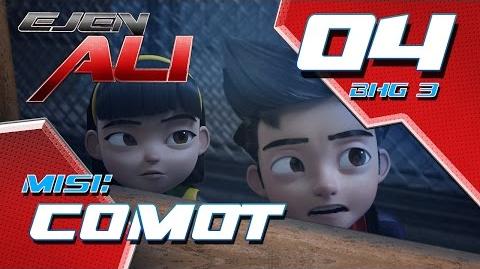