Ali is a normal 12-year-old schoolboy who struggles in school, is a victim of bullying, and lacks of parental love. His life changes forever when he accidentally wields a spy tech stolen by two evil spies.

The story starts with two evil spies, Dos and Trez sneaking into one of M.A.T.A. headquarters. Trez takes control over the security cameras, while Dos disguises herself as a scientist using Agent Jenny's outfit after Dos electrocutes her in the washroom. She bumps into Agent Bakar and he flirts with her. Dos enters a room and using Jenny's identity, she finds a small round device. She is about to steal it when the alarms rings. When Agent Bakar and the M.A.T.A. robots enter the room, they find that Dos has escaped from the air vent and the device is stolen.

The next morning, Ali is woken up by the call from his father. He then realizes that he will be late for school. After hurriedly dressed up, he uses his scooter to go to school. Along the way, he accidentally tripped Aunty Faye and she fell into the bushes, avoiding incoming passengers, and hiding from Shaun and Syed after Ali tried to stop them from bullying an Indian student by taking away his ice cream.

Meanwhile, Dos arrives at a Nasi Lemak cyber stall and the hawker, Wak Musang places the stolen device onto a plate and then covered with a box. Before she leaves, she tells him that one of her allies will come to retrieve it and the code is "Tempoyak Udang". As Ali goes down the stairs and onto the passageway, he nearly crashes into a white stray cat and the Nasi Lemak cyber stall. Ali orders a Nasi Lemak and when he mentions the word "Tempoyak Udang" literally, Wak Musang is shocked and gives him a box of Nasi Lemak free of charge. Ali then rushes to school after hearing the school bell rings, signaling that class has started and he is late. A few seconds later, a man wearing all black comes to the stall and asks for "Tempoyak Udang". That is when Wak Musang realizes that he has mistaken Ali to be the retriever of the stolen device and he has given him the box containing it.

As Ali arrives at class, he signals Viktor to distract Puan Munah. When she is distracted, Ali sneaks into the classroom, but is discovered by Alicia. Puan Munah came to Ali's desk with a cane and scolds him for failing in his Math test. Ali apologizes to her, but she replies that it is no use for apologizing if he still does not change. She tosses Ali's failed Math paper towards him and uses her cane to slice it into half right in front of his face, leaving him in shock.

During recess, Ali talks to Viktor about his test results and wonders how he can improve it. Then, Ali takes his lunchbox and tells Viktor to leave the canteen as the bullies Shaun and Syed are searching for him. Ali and Viktor hide in a toilet room and Ali is unsure what he should do now. Viktor then quoted a sentence from the game he is playing in his tablet: "Bravery is not obtain when you battle and win, but it is when you continue to fight for good intentions even when obstacles come."

Inside the lunchbox, the stolen device starts blinking and making soft sounds. The scene changes to a building that is under construction. Uno, the computer used by Dos has managed to track down the device. Dos is commanded to retrieve the device with Trez and is warned not to fail this mission.

After school, Ali shows off his yoyo skills to Viktor. Before leaving, Viktor invites Ali to play the game Detektif Jebat, which is shown in Ali's tablet. Then, Bakar comes to fetch Ali, who is revealed to be Ali's uncle. As they walk to a shop, Bakar holds his phone behind him and it looks like he is tracking something.

As Ali and Bakar enter a shop, Ali goes to buy some bread but is confused by Bakar's unusual actions. Bakar quietly asks Ali whether he has something that does not belong to him. Ali touches his school uniform and denies it. Bakar spots Dos and Trez are already in the shop. He takes Ali to a corner and tells him that he is now in danger because the two suspicious people are trying to catch him. When Trez found them, he pushes the shop cabinets and they fall like dominos. Bakar tosses Ali to the back door and holds the cabinets before they fall onto him. He tells Ali to run and Ali uses the back door to escape. Ali rides on his scooter in an attempt to escape but Dos chases him. Meanwhile, Tres fights with Bakar and is eventually defeated when Bakar uses an insect killer spray on his eyes. However, Dos manages to chase down Ali and capture him.

Later Dos and Tres take Ali to construct building to get the IRIS. Dos integrant Ali because he was agent meanwhile Tres check Ali bag finally he get box of "Nasi Lemak Tempoyak Udang" and under of food is IRIS.

All characters appear as debut in the first season and episode.

There is currently no errors found in this mission. 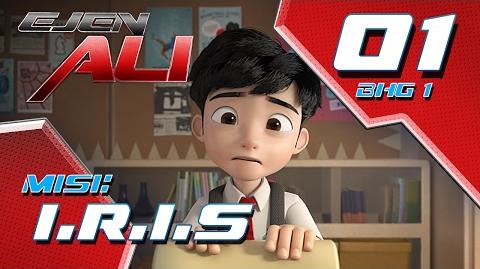 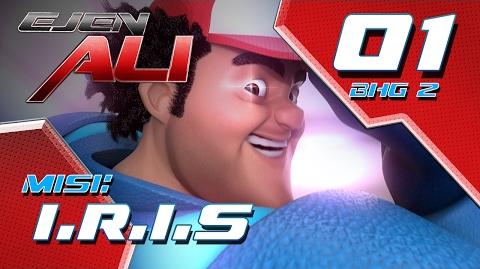 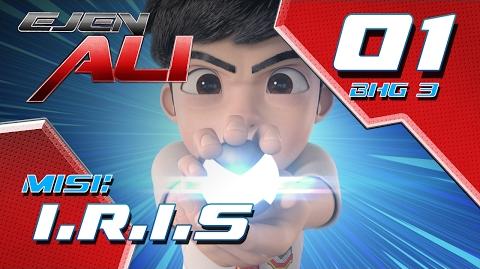