Neonimus is a 'virtual' character that nobody knows about its true identity. However, it's known for being a cybercrime mastermind.

In the earlier concepts, Neonimus is called "Nonimus". It is a cyber terrorist who has kidnapped Ali's father to order to obtain his creation, the I.R.I.S.. However, the I.R.I.S. is in the safe hands of Ali. Hence, Ali, Bakar and Comot must save his father from Nonimus.

In this game, Neonimus is the one who hacks into M.A.T.A. safehouse, trapping Bakar and Comot inside. Ali is tasked to save them, with the help of General Rama and Jenny. Its name is revealed in Jenny's dialogue "Oh no! We have fallen into Neonimus' trap!"

After Ali saves Bakar and Comot, the trio attempts to escape as Neonimus sets the safehouse into self-destruct mode. When the countdown is done, nothing happens. It turns out Neonimus is playing with the agents and quickly leaves, angering General Rama greatly. Nevertheless, the general congratulates the trio for a good job in saving the safehouse.

Neonimus first appears in MISSION: PLAY as it sends out a drone to cause mayhem in Cyberaya CRT train station. 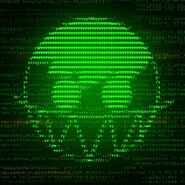