“Bravery is not when you fight and win, but it is when you continue to fight for the sake of pure purposes, even though you face various obstacles.”
―Viktor advise Ali in MISSION: IRIS

Viktor is a student in Class 6 Avicenna in SRT Cyberaya and Ali's best friend. He is an avid gamer and likes to play a video game called "Detektif Jebat" on his tablet, usually prompting Ali to join him. Although Viktor is usually seen playing video games, he is the second smartest in class after Alicia and does well in school, unlike Ali.

Viktor is a pretty laidback, easy-going guy; he never gets extremely furious or raises his voice in anger, is on neutral terms with everybody (except Sarsi, who views him as competition when it comes to grades) and never gets stressed. He might be a bit oblivious to his surroundings when he's playing his games, but when he's not on his tablet, Viktor is actually quite attentive, easily taking notice when Ali is not his usual self or something's bothering him, such as when Ali was unknowingly making faces at Alicia in Mission: Even. The few times he catches wind of Ali's problems, he offers his best friend advice, like in Mission: Protocol Gegas, when Ali had to deal with a colder-than-usual Alicia.

Viktor is also very supportive of Ali and doesn't mind any of the favors Ali has asked from him. He's also patient and a good listener, sitting through all of Ali's rants (whether or not he has his tablet with him; he's attentive during conversations even when playing games) and patiently enduring Ali whenever he's in a foul mood. He also constantly prompts Ali to relax whenever he's stressed.

Though Viktor is not the kind of person to get irritated easily, he gets apprehensive whenever Alicia comes over to bother Ali, knowing how much he dislikes her. In Mission: Sensation, he had looked up to Ali's then-famous alter ego, Cyberwira, and shows his enthusiastic fanboy side. 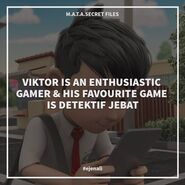