Black (bald on the middle)

Wak Musang is a minor character in Agent Ali. He is both a Nasi Lemak seller and an information broker.

He appears in MISSION: COMOT when he shows Abang Bear a video about the I.R.I.S. that Dos gave it to him in Episode 1.

In MISSION: UNO he was in the cell of MATA alongside ejen Bakar. 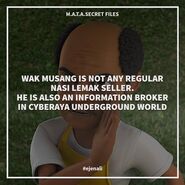