“I want you to be a super-agent as intended from I.R.I.S. project.”
―Zain want Ali to be Super Agent in MISSION: PURPOSE & MISSION: ROLE

Zain is the chief pillar of NEURO and resides in M.A.T.A. Headquarters. He first appears in a flashback in "MISSION: PROTOCOL GEGAS". His first video appearance is in MISSION: ORIENTATION, and his name is revealed in the end credits. 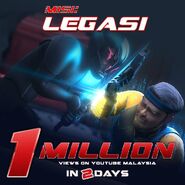 The Four Chief Pillars of M.A.T.A.

Zain fights along with Djin

Zain along with the other chief pillars